With decades of on-road knowledge, and an executive role focused on women behind the wheel, Shelley Uvanile-Hesch has strong opinions and compelling ideas on how to improve her fellow drivers’ experience.

“Have respect for the know-how” said Shelley Uvanile-Hesch. “We have doctors and bureaucrats making public safety recommendations, sometimes without realistic data to support their decisions, but none of them has ever been behind the wheel of a truck. Regulations constantly change yet no one investigates how this affects the drivers.” 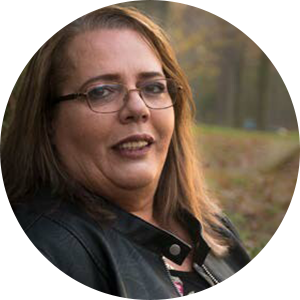 This thoughtful approach typifies Uvanile-Hesch, a driver with North American pharmaceutical carrier Sharp Transportation Systems, Inc., of Cambridge, Ontario. She described herself as someone who does black and white, but not gray (a refreshing outlook in a world muddied by politics, by pandering and the need to be right, too often at the expense of others), and explained, “People tell me I have to be more politically correct and not so blunt, but this is me. If you ask me what I think, I’m going to tell you.”

Uvanile-Hesch’s interest in doing right by others and affinity for the asphalt came early: her father, Nick, was a truck driver and she would occasionally ride with him, experiencing cab and life lessons as a passenger. Her own on-road career began behind the wheel of a school bus before moving to tour buses. From this, she graduated to six-wheelers, joining Sharp Transportation in 2005 and driving team with her husband, Chris, until his August 2019 death.

Over time, Uvanile-Hesch has seen growth, both in the numbers of female drivers handling rigs and in the levels of acceptance among what was for years a male-dominated industry. In the early days, comments ranged from suggestions that she return to the kitchen to some of a less-savory nature.

Nor were the rest areas used by truckers always suitable to the needs of both sexes, she said, noting that male drivers would stand guard outside the showers to allow their female colleagues a measure of privacy and safety.

Today, there is greater tolerance for women behind the wheel. Said Uvanile-Hesch, “Every year there are more female drivers, and we’re seeing more two-woman teams.”

In 2015, Uvanile-Hesch’s professional obligations expanded dramatically when she assumed the position of CEO of Women's Trucking Federation of Canada (WTFC), an organization she founded with two colleagues who shared her concerns that there weren’t sufficient resources for Canadian women drivers.

“We wanted stronger networking opportunities and support for trucking as a viable career option,” explained Uvanile-Hesch. “And we wanted an amplified voice in safety regulations.”

It was a timely decision: the WTFC began with 65 members. In 2021 the membership, which includes men, too, has swelled to more than 700.

Said Uvanile-Hesch, “Greater than 25% of our members are men who believe in women’s roles in the industry. We’d like men, such as the ones who approach us after a meeting and say, ‘that was a really good idea,’ to be more vocal.”

WTFC offers support and guidance in areas including empowerment and employment for women within transportation, safety issues, continued training, and mentorship.

Representatives speak at career fairs, schools, women’s shelters and truck shows. The organization maintains a scholarship program, which fully covers training for recipients ($44,000 in scholarships were awarded from March 2019 to March 2020; three full scholarships for approximately $27,000 will be announced by the end of March 2021.)

Uvanile-Hesch noted positive movement with the January 2021 passage of Bill C-65, which strengthens protections against workplace violence and harassment, and with mandatory entry level training for drivers within each province, both of which will prove advantageous to women considering transportation as a career.

In February 2021, the WTFC pledged its support to educate drivers in recognizing and reporting suspected cases of human trafficking, a billion-dollar criminal industry that promotes the sexual slavery or forced labor of men, women and children, and is superseded only by the monies accrued in arms trafficking.

A 2020 inductee into The Private Motor Truck Council of Canada Hall of Fame for Professional Drivers, she also hopes to use her platform to encourage respect for the countless truckers who have stayed on the job throughout the COVID-19 pandemic. With restrictions still in place and with so many businesses limiting use of their facilities to employees only (or shutting down entirely), drivers frequently lack access to restrooms or showers, forcing them to add multiple stops to their schedules simply to manage their basic hygiene needs. Uvanile-Hesch emphasized this is unacceptable, as truckers are, in fact, essential workers and deserving of recognition.

“I’m realistic in my approach,” said Uvanile-Hesch, “and consider myself in tune with the driving population. I’d like to see drivers get back to that brotherhood and sisterhood we used to be.”

She paused, recalling a lesson she learned years ago from the cab of her father’s rig as he introduced her to the open road: “I grew up in a household where my dad said you may not agree with someone but always respect them. We have to be honest. And we have to be kind. These are different—and difficult—times, yes, but we have to remember to be kind to each other.”

Looking for more industry-focused content like this? Be sure to visit our Resources page to stay up to speed on the latest trends and topics across the transportation supply chain.