Truck transportation capacity was very tight throughout 2021, which resulted in the sharpest yearly increase in prices on record. Capacity conditions have been especially tight for over-the-road dry van truckload carriers. Given this is the largest single sector of trucking and it maps closely to code 484121 (general freight, long-distance, truckload) of the North American Industrial Classification System (NAICS) that is utilized to categorize establishments in the US, this analysis will focus mostly on this sector.

The data for this analysis come from the Bureau of Labor Statistics (BLS) and, in particular, their Quarterly Census of Employment and Wages (QCEW) program — which the BLS Handbook of Methods explains is based on administrative records regarding state-level unemployment insurance tax filings submitted by ~10.8 million distinct establishments—as well as the Current Employment Statistics (CES) program.

Readers should note a few features of these programs: (i) these data can include private fleets because establishment classification is based on the primary type of activity performed, not ownership; (ii) these data do not include self-employed truck drivers; and (iii) these data include all employees at an establishment including mechanics, dispatchers and upper managers, in addition to truck drivers.

With these caveats in mind, below I discuss five facts about trucking employment that can be derived from these BLS programs

Data from CES through August 2021 show that while headline truck transportation employment is down 30,100 jobs (1.9%) relative to August 2019, there has been a substantial shift of employment across subsectors. The general freight, local sector (NAICS 484110) has seen a substantial increase of 14,300 jobs (5.3%), whereas general freight, long-distance, truckload(NAICS 484121) is down 16,400 jobs (3.1%). This explains why capacity in the over-the-road dry van TL sector has felt far tighter than the headline employment figure would suggest. 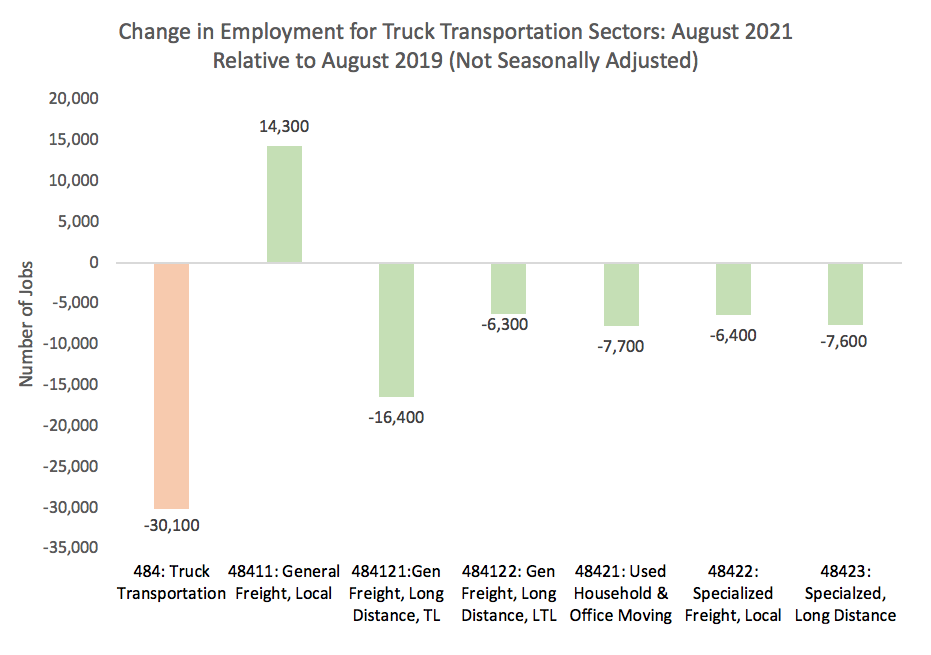 Fact #2: General Freight, Long-Distance, TL Jobs Have Been Slow to Recover Until Recently

While the precise cause cannot be certain, some speculative explanations are driver training schools beginning to operate at greater capacity coupled with individuals being more comfortable operating over-the-road given the pandemic is more under control than in the winter of 2021. 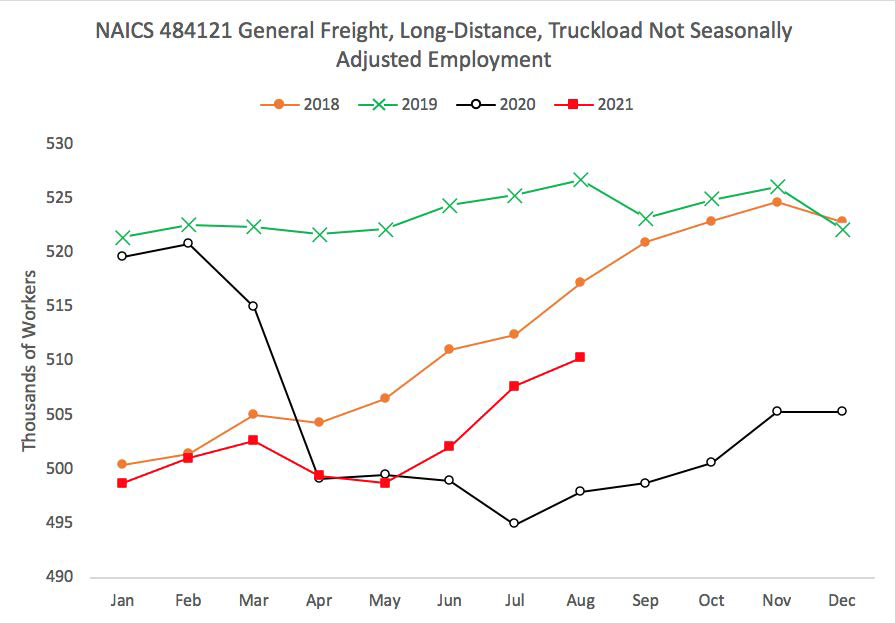 Fact #3: The Decline in General Freight, Long-Distance, TL Jobs Has Been Uneven Across States

Examining state-level employment in the general freight, long-distance, TL sector from the QCEW, substantial variation is observed in job losses. For the lower 48 states, QCEW registered an average of 507,154 jobs in 2020, which was 16,850 fewer jobs (–3.2%) than the average of 2019.

However, some states saw substantial jobs in employment, with California, the second largest state for general freight, long-distance, TL employment behind Texas, seeing a jump of almost 2,000 jobs (6.4%) in this sector. In contrast, other states such as Wyoming and West Virginia with their strong exposure to mining as well as Indiana and Ohio with their strong exposure to manufacturing saw substantial declines. This pattern of findings suggests state-level demand conditions likely have had far more to do with both the drop of employment observed in 2020 as well as the pace that general freight, long-distance, TL jobs have rebounded. 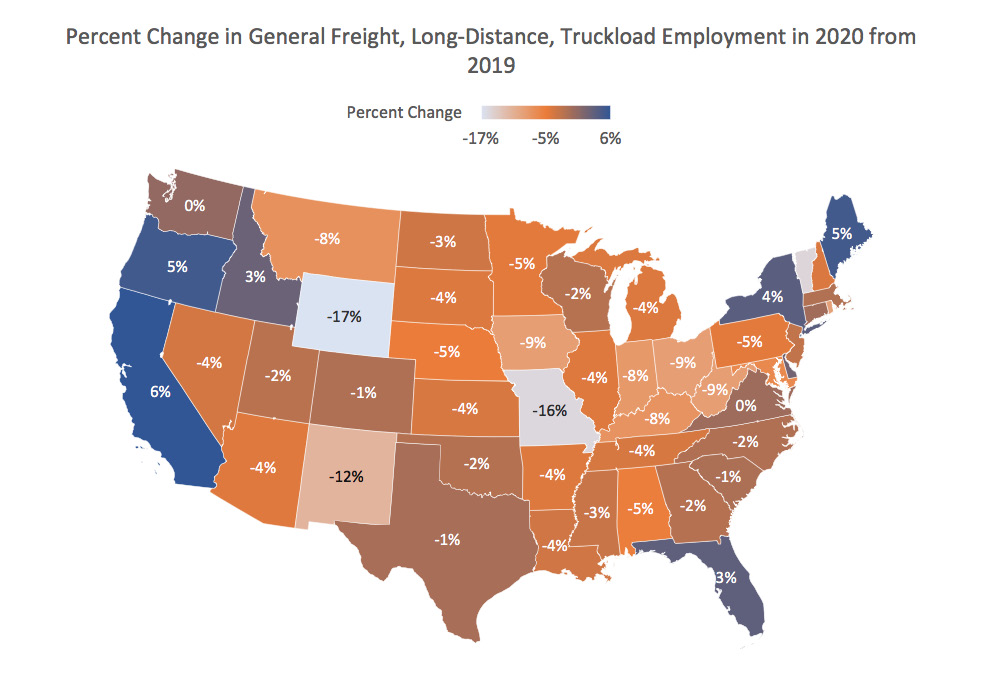 Fact #4: There Has Been Unprecedented Growth in New General Freight, Long-Distance, TL Establishments ‒ and These Establishments Tend to be Very Small

Crucially for shippers seeking capacity, industry reporting suggests these small carriers are less likely to adopt the common practice of customizing service to a small number of anchor shippers (usually manufacturers) and, instead, relying more on brokers to obtain high-priced spot freight.

Fact #5: The Surge of New Entrants is Centered Around States with a Distribution-Centric Footprint

State-level QCEW data indicates the states that saw the sharpest increases in the number of new general freight, long-distance, TL establishments are hubs for importing and/or distributing consumer freight. The top six states, in descending order, are Texas, Illinois, California, Florida, North Carolina and Georgia. This finding is consistent with very strong consumer spending since June 2020 which has resulted in record levels of retailer orders and, consequently, imports of manufactured goods.

1 Per the BLS’s Handbook of Methods, an establishment “is commonly understood as a single economic unit, such as a farm, a mine, a factory, or a store, that produces goods or services. Establishments are typically at one physical location and engaged in one, or predominantly one, type of economic activity for which a single industrial classification may be applied.”