Since the COVID-19 pandemic began in March 2020, the market for truckload (TL) freight in the United States has been on a roller coaster ride the likes of which has not been seen since interstate deregulation in 1980. The unique feature of the COVID-19 recession has been how lockdowns reallocated demand for TL transport toward different shipper verticals. 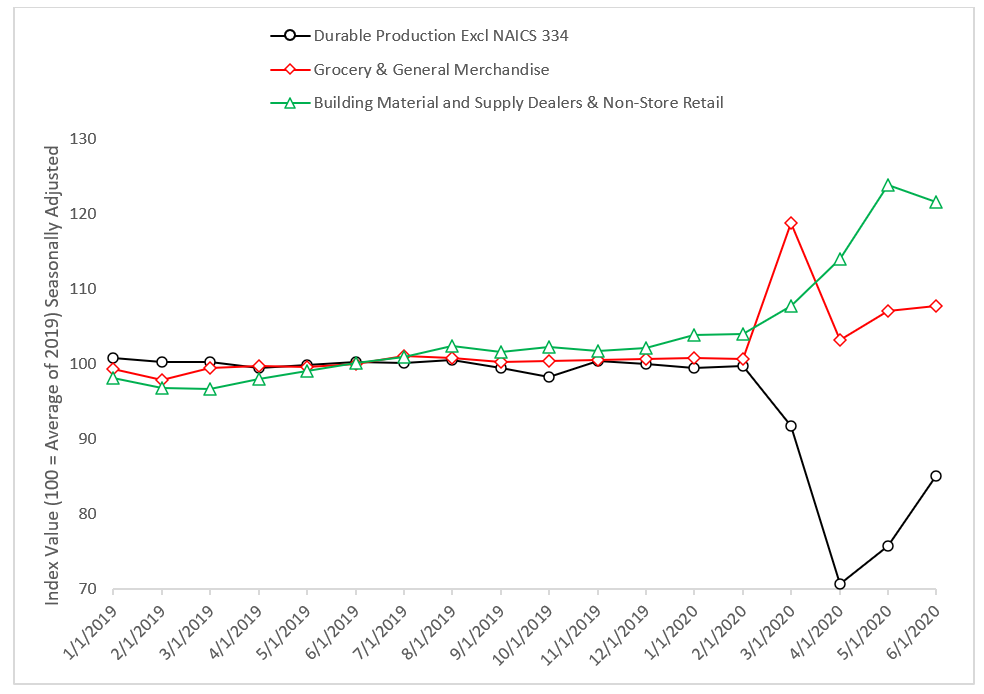 As can be seen, in March 2020 there was tremendous demand for replenishment of grocery stores and warehouse clubs and superstores as Americans stocked up on food and dry goods. Due to unprecedented economic stimulus, fear of shopping in-person and consumers allocating spending away from services towards physical goods, May and June 2020 saw a tremendous increase in purchases from e-retailers as well as big-box building material suppliers. In contrast, demand for TL transportation from industrial shippers, especially those in the primary metals and machinery sectors, has declined dramatically and, as of August 2020, has not shown a substantial recovery.

The imbalance of TL demand across shipper verticals has done what seemed unthinkable in the midst of the freight downturn that occurred in April 2020. The imbalance has driven the dry van spot market to levels of capacity tightness not seen since the summer of 2018. As evidence, the plot below presents DAT Solutions’ dry van load-to-truck ratio in both unadjusted and seasonally adjusted formats back to January 2017, which were obtained from DAT’s website.

Remarkably, July 2020’s unadjusted load-to-truck ratio exceeded June’s value, despite June traditionally being the tightest month of the year for spot market capacity. Furthermore, the month-over-month spike in the seasonally adjusted index is the most pronounced increase that has been observed since January 2018, which corresponded to the first full month that the electronic logging device (ELD) mandate was in effect. 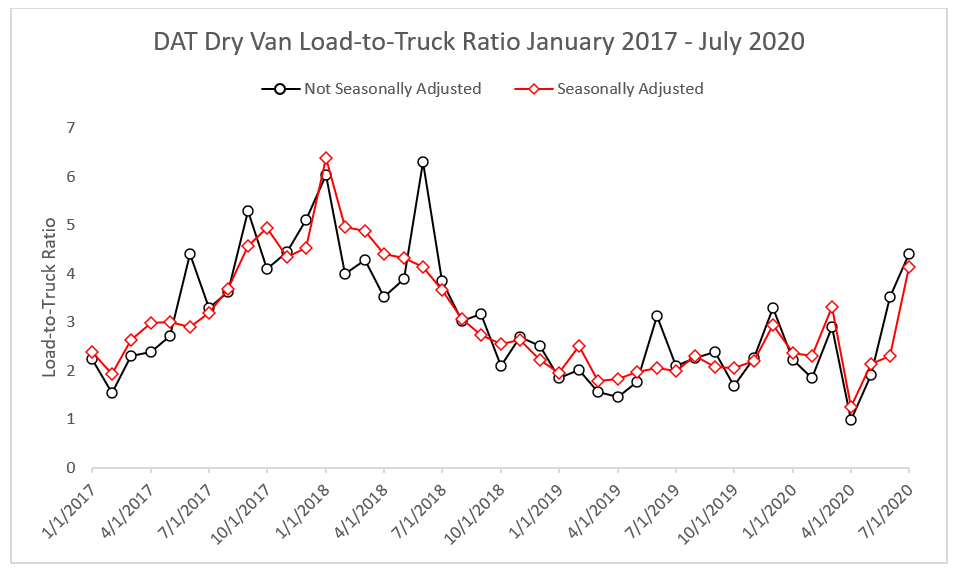 What may be even more unexpected about the current rally in the dry van spot market is the robust increase in prices per DAT Solution’s average monthly prices as a function of capacity. To illustrate this, the chart below plots the month-over-month change in the dry van load-to-truck ratio (X-axis) against the month-over-month change in price for spot shipments (Y-axis) for May 2019 through July 2020.

Pricing data was obtained from DAT’s LinkedIn posts.  As shown below, April 2020 saw a tremendous decrease in the load-to-truck ratio and a concomitant decrease in spot prices. While the load-to-truck ratio rebounded in May 2020, spot prices on average declined by $0.03 from April 2020. This likely occurred because many carriers were anxious to obtain spot loads to make up for lost contract volume with industrial shippers and, consequently, were very aggressive when bidding for spot loads.

Spot capacity further tightened in June 2020, with the resulting price increase being slightly above the linear trend. July 2020's tightening capacity brought a much more robust increase in price, well above the trendline. One explanation for this is that the imbalance of freight across shipper verticals as shown in the first figure has caused misalignment in carriers’ networks such that they are placing higher bids due to higher costs to reposition equipment to haul spot loads. Another explanation is that carriers are becoming less aggressive in spot bids as contract volumes come back online. In any case, these dynamics bode well for carriers but ill for shippers. 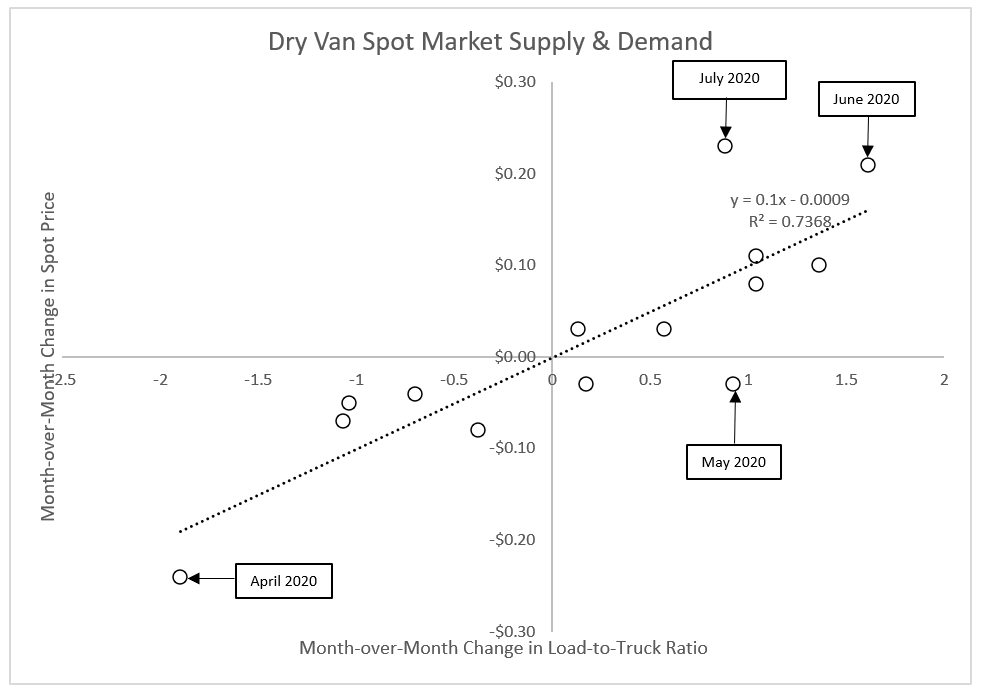 The remaining question is whether the robust spot market will translate to higher contract prices. As shown below, contract pricing data for long-distance general freight TL shipments provided by the Bureau of Labor Statistics indicates that contract prices for June 2020 were 7.5% lower than their June 2019 values. This has erased nearly all of the pricing gains TL carriers were able to obtain during the latter half of 2017 through 2018.

While it is widely accepted that higher spot prices cascade to higher contract prices, albeit with a lag, the BLS’ data to this point do not indicate contract prices are moving higher. One explanation is that the substantial uncertainty about future demand conditions has resulted in carriers being hesitant to try and renegotiate contract prices. Due to the resurgence of confirmed COVID-19 cases in the U.S., coupled with uncertainty about further government stimulus, it is difficult to predict future pricing dynamics. 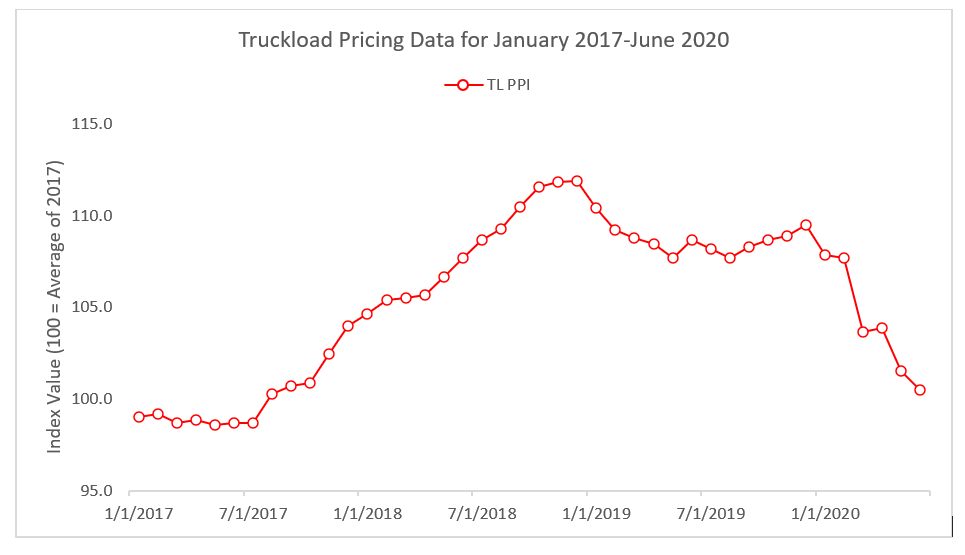 Discover How Trimble Can Help You Navigate A Changing Market

Do you need tools to stay productive in the face of changing market conditions?

Contact us today to find out how Trimble solutions can help maximize your supply chain visibility and efficiency of your business.